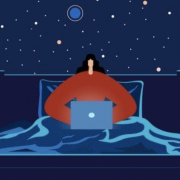 Here is a guest blog from one of our current practicum students, Abigail Overstreet. Abigail is in the MSSW/MSCFT dual degree program at the University of Louisville Raymond A. Kent School of Social Work.

The phrase “bedtime procrastination” is first credited to this 2014 study from the Netherlands. The addition of “revenge” seems to have first started appearing on Chinese internet sites in 2016, according to Health.com. Since then, the term revenge bedtime procrastination has found its way onto social media platforms, especially after writer Daphne K. Lee publicly tweeted, “Learned a very relatable term today: “報復性熬夜” (revenge bedtime procrastination), a phenomenon in which people who don’t have much control over their daytime life refuse to sleep early in order to regain some sense of freedom during late night hours.”

Although delaying sleep to finish ‘just one more episode and/or chapter’ is a very human experience, the repeated procrastination of sleep to meet some interpersonal need is most often found in overworked people. Populations that are predisposed to this habit are parents of young children, students, caregivers, or professionals with poor work/life balance. In some cases, the habit of revenge bedtime procrastination formed during a busy season of life and has continued even though the need for it has passed.

-Take an honest inventory of your daily activities and see where your minutes are being allotted. Those ten-minute social media scroll breaks add up—one of the easiest ways to tally your phone usage is to activate your phone’s ability to monitor your screen time.

-Learn to be present in the current activity and space. When you’re at work—do work, when you’re home, be fully engaged with your family and your leisure time. Obviously with the pandemic, this separation of physical space has become easier said than done, but if it is possible, devote a singular space or consistent set of hours to your work and then step away. Stop devoting today’s mental energy to tomorrow’s tasks.

-Stop setting yourself up for failure and recognize your limits–even Clark Kent only published one newspaper a day.

-Seek out respite services or rely on your support network to get some critical ‘me-time’ while caregiving or parenting.

-Speak to a counselor/therapist about time management and sleep hygiene strategies if you’re still struggling. We at True North Counseling are here to assist you. 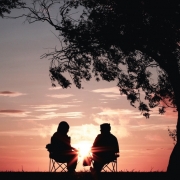 This is the third in a multi-part series on Safety in Intimate Relationships. (Check out the previous blogs on Emotional Safety and Physical Safety!) When I have conversations with people about safety in intimate relationships, often the only thing that comes to mind is physical safety. However, safety encompasses more than that. Here are some signs of intellectual safety in a relationship:

Safety in relationships is worth prioritizing!

https://truenorththerapylouisville.com/wp-content/uploads/2021/04/harli-marten-M9jrKDXOQoU-unsplash.jpg 667 1000 Jennifer Kendrick https://truenorththerapylouisville.com/wp-content/uploads/2022/08/True_North_Logo_2022-1-1-277x300.png Jennifer Kendrick2021-04-01 14:34:042021-04-01 14:34:04Safety in Intimate Relationships: Intellectual safety
Medical Disclaimer. The information on this website is not intended to be a substitute for professional medical advice or treatment. All content on this website, including any text, graphics, images, and information, is only for general informational purposes. Please seek help from a qualified medical professional if you are in need of any type of medical care. Your phone call may not be responded to within 24 hours. If you need immediate help, please call the 24-hour Centerstone Crisis Line at: 502-777-7525.